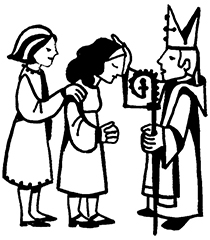 Confirmation is about renewing one’s baptismal promises before receiving communion for the first time.

In the early church, initiation consisted of immersion in water (Baptism), laying on of hands and anointing with chrism by the bishop (Confirmation), and finally joining the community for the first time at the Lord’s table (The Eucharist), all of which happened at the one ceremony.

Over time, the ages people received these three sacraments changed and many older Catholics, those over forty, would have received The Eucharist before receiving Confirmation. This situation came about in the early 1900s when Pope Pius X lowered the age for first communion from around twelve, as it was then, to around seven years of age. However, Confirmation got left where it was, so the order of sacraments of initiation got switched around.

Because it was no longer the sacrament which linked Baptism and First Communion, Confirmation gradually took on new meanings, including the ‘sacrament of adulthood’ and becoming ‘a soldier of Christ’

The new Rite of Confirmation, issued in 1971, put confirmation back where it belongs as the link between Baptism and First Communion. Confirmation is the sacrament which ‘seals’ or ‘reaffirms’ our baptism before we take the final step in becoming a full member of the Catholic Church – sharing in Holy Communion for the first time.

In recent years many dioceses in Australia and other parts of the world have responded to the Church’s call to restore confirmation to its proper place and meaning.

Parishes are now responsible for preparing their younger members to complete their initiation through Confirmation and Communion, which are usually celebrated at the same Mass or in the same week.

The Liturgy of Confirmation sees the Bishop extend his hands over the whole group of candidates. Since the time of the Apostles this gesture has signified the gift of the Spirit. The Bishop invokes the outpouring of the Holy Spirit with a prayer.